I’m really excited about a new investment opportunity. I want to build a portfolio of poorhouses, flop houses, and cardboard boxes. Why? It seems to be where many successful professionals think they’ll ultimately end up living. And plus, in the investing spirit of Peter Lynch, I’d be “buying something I understand.”

Just this week, three signs confirming this investment thesis came my way. First, in the book The Soul of Shame, where psychiatrist Curt Thompson described a successful marketing executive bracing for the day when his business would collapse and “he and his family would one day end up living in a box under a bridge.” Then there’s ABC news anchor Dan Harris who worried that his receding hairline would impact his camera-facing career. In the book 10% Happier: How I Tamed the Voice in My Head, Reduced Stress without Losing My Edge, and Found Self-Help That Actually Works – A True Story,  he described his irrational tendency to  “immediately project forward to an unpleasant future (e.g. Balding → Unemployment → Flophouse in Duluth).” And then one of my teachers, Andrew Taggart sent me the following note: “I, meanwhile, am beginning to count on my fingers the number of high-powered executives who have mentioned to me their fear of finding themselves in ‘the poorhouse’ someday. (I may have to rent some more fingers.)”

The caveman must survive

What the heck is going on? I guess there’s the evolutionary (pop) theory that these are our caveman instincts on display enforcing vigilance in anticipation of the cataclysmic event that knocks us off of our professional pedestals. (But recall that fear inhibits the right side of our brain and hence our creativity and problem solving skills.) Or maybe it’s the way we confuse financial security and meaning? Or that our stress is a perverted relationship with time?

Earlier this year, I was in an entrepreneurial rut. And I confided in Andrew that this was leaking into my personal life. Despite pouring my heart and soul into the RadReads community – writing, podcasts, and events – on a week-over-week basis the subscriber base was actually shrinking. Fo real? Then my caveman instincts kicked in: I started researching growth hacks, creating new landing pages, and being more aggressive in my marketing. After all, a decline in email subscribers must be the canary in the flop house. Andrew reminded me of my preoccupation with “the cult of scale” and one of its gnarly side effects: the idea that “a line trending downward carries ideas of failure, degradation, bleeding, and decay.”

There’s a financial concept called negative convexity. In layman’s terms it describes a security that tends to lose more than it can gain. So tails, I lose; heads I win, but not as much. You can see this at play with these flop house predictions. Yes, The losses are amplified, but we’re also too quick to dismiss the wins.

The imperial tendency of the mind

Dan Harris calls this Prapanca, a Buddhist term he describes as “the imperialistic tendency of the mind.” I’ve struggled with this catastrophization and want to share one of my tools. Every time one of these events happen, I write them down in Evernote. It’s funny to look back at them, because as Adam says “the odds are, it’s not the worst thing.” In fact, oftentimes its not even a thing. Here’s a screenshot of my Prapanca Journal: 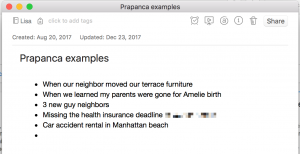 I pasted the doc “as is” to avoid any narrative-building confirmation bias (check the “updated” date and I hid one thing for privacy). Yes, with two young kids in the city, neighbors can be a big source of anxiety and you’ll recall the car rental incident (which had a 100% positive resolution). I urge you to try this – you’ll quickly realize how thoughts think themselves and the flop house probabilities will plummet.

And just like convexity, we should remember this in the opposite direction – the wins, both big and small must be savored. When good things happen to us, we’re quick to dismiss them, move on, and reset our baseline expectations. Here, Adam proposes that in these milestone moments he rewinds the clock, asking himself “If my five years ago self knew that this was going to happen, how excited would I be?” Because after all, “moments of joy are really important and part of what makes life worth living and what we have to look forward to. Being human is being able to enjoy life.”