My wife Lisa really likes it when I’m hungover. Not the post-Vegas kind, but the one-too-many-bottles-of-wine-with-married-friends kind of hangover. (The latter ensures I’m still coherent enough to not abdicate my parental responsibilities.) When I’m hungover, my mind can ease out of its regular state of restlessness. The urge to listen to podcasts, read my Kindle or work on this blog dissipates for a couple of hours. So what is it about my mushy and incoherent brain that makes me so attractive?

The answer is working less. Yet I find it so damn hard to simultaneously dial down my ambition AND overcome my fears that this will all come crashing down. And it turns out that if we look around, our loved ones quietly imploring us to strike that delicate balance and I know that many RadReaders find themselves in a similar predicament.

Take Peter Nguyen, personal stylist and blogger at The Essential Man. Reading It Doesn’t Have to be Crazy at Work led him to a personal revelation: 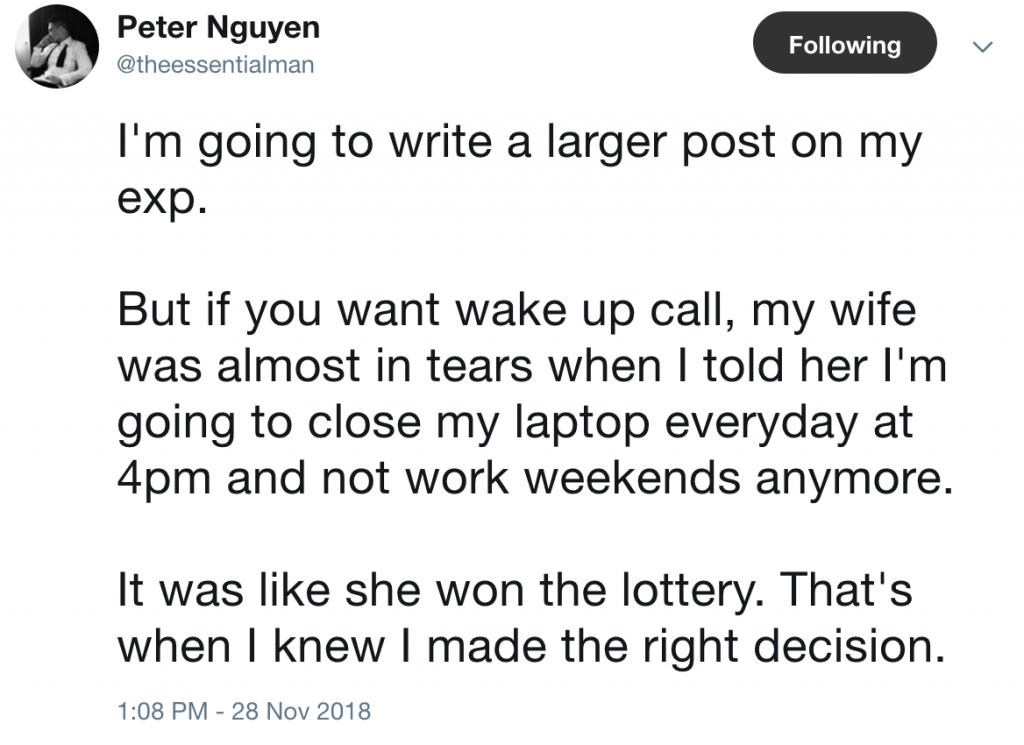 Then there’s the recent New York Times Op-ed Who am I if Not Employed in which Maryam Banikarim, the former Global CMO of Hyatt recounts her frenetic pace of work back back to her part-time job as a sixteen year old. After leaving Hyatt at age fifty, she almost jumped into another role that would require commuting from Chicago to New York until her eighteen year old son (“not the most emotionally expressive person”) made her think twice, telling her:

“Mom, I will totally understand if you take another job in New York. I just want to say that if you do, I’ll miss you.”

Don’t we all need to just suck it up and do the work?

Here’s the counter-argument. First, you haven’t figured out how to be a financially self-sustaining entrepreneur. Second, isn’t your work ethic the reason you have the freedom to leave the corporate track and create life adventures for your family? And third, isn’t your work a huge source of meaning in your life?

All three of these statements are true. Yet they don’t paint the full picture of the insatiability of ambition.

The razor’s edge of ambition

The razor’s edge is a universal metaphor that can be applied to Instagram, ice cream and ambition. Take the graph below: 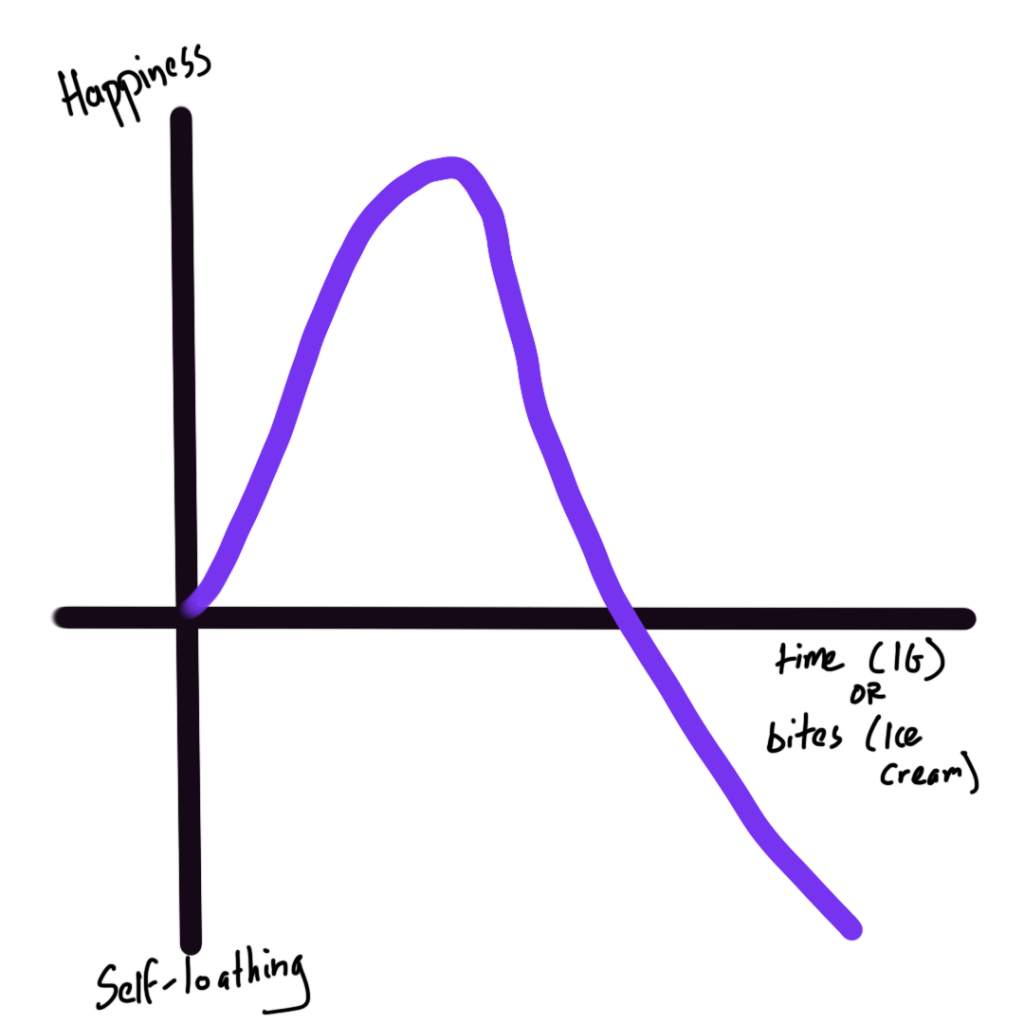 The razor’s edge represents the maximum of this graph. Just enough to feel emotionally fulfilled, yet not too much to spiral into self-loathing, restlessness and regret. (In ice cream terms: one kids’ sized scoop.)

Now let’s examine ambition through the lens of this chart. The upward sloping part represents working to ensure our physiological and safety needs our covered and that we find our work meaningful. This part is governed by abundance and trust and the belief that there is enough.

On the other side of the razor’s edge lies scarcity or the feeling of there’s not enough. In The Soul of Money, Lynne Twist describes how scarcity tricks us into believing that there’s never enough money, recognition, stuff to own, and status. Scarcity ties our self worth to our net worth and thus makes us feel like we’re not enough.

No one wants to feel that way, so you keep the laptop open. We succumb to the seductive (yet flawed) thinking that JUST one more email will make us feel like we are enough.

Navigating the razor’s edge is frigging hard and might only look feasible in hindsight. And while I’m generally skeptical of multi-millionaires dispensing advice from their retired perches, I found parts of Michael Ovitz’s memoir (aptly titled Who is Michael Ovitz) relatable. In this passage, the super-agent (and founder of CAA) describes advice he received at thirty-three (h/t @awealthofcs):

In 1979, when I was thirty-three, Ted Ashley at Warner Bros. took me aside and said, “I’m going to give you some great advice.” He grinned ruefully. “And, knowing you, you’re not going to take it. But here it is: I could have worked ten percent less, and it wouldn’t have made a difference in my professional success. But I would have been a lot happier.”

And now in retirement, Ovitz converts the percentage into actual years of his life:

I didn’t take it. I see now that I could have worked as much as 20 percent less, and it wouldn’t have cost me. If I’d worked even 10 percent less, across thirty years, that’s three whole extra years of life I’d have enjoyed.

This reminds me of the work of the palliative care nurse Bronnie Ware who chronicled the most common regrets of individuals on their deathbeds. She was struck in particular by one that “from every male patient she nursed:” I wish I hadn’t worked so hard. Ware adds,

They missed their children’s youth and their partner’s companionship. Women also spoke of this regret, but as most were from an older generation, many of the female patients had not been breadwinners. All of the men I nursed deeply regretted spending so much of their lives on the treadmill of a work existence.

Back to the hangover

In conversations this morning Lisa added:

I wouldn’t feel like I won the lottery if you didn’t work so much. I feel so lucky that I have a husband with so much determination and drive. But you know yourself that you work too much and that you’ll be happier if you’re able to let go.

I guess I’m the one who wins the lottery if I shut down the laptop.

My coaching practice helps clients truly discern their ambition and flip scarcity. Hit me up at khe [at] radreads [dot] co to learn more.