Let’s play a game together.

I want you to close your eyes and think back to your early 20s.

Bring into focus what you were doing. Where you were situated. What you were wearing. Whom you were hanging with. And the dreams and desires that consumed your intimate daily thoughts.

Now ask yourself the question:

What’s something you wanted back then that you thought would make you really happy?

Maybe it was a really nice watch, so that you could subtly flex your bonus to your college bros.

Or a serious relationship to get over that sting of being shunned in high school.

Or running a marathon – at a time, that would make others say, “Wow, what an athlete.”

Or maybe it was getting accepted to a prestigious MBA program – at a quaint, little school outside of Boston.

Alright, now that you’ve identified that achievement or item, ask yourself:

Did it actually bring me lasting happiness?

Note that word lasting. Inevitably, when you achieved said goal, you felt a spike in happiness. But did it last more than a couple of weeks? Or was it days? (And what was it like after that?)

As the child of first generation immigrants I learned that 6 figures was a symbolic container for many things: financial security, status, and yes, the ability to make material purchases (i.e., hard-to-find Nikes on eBay) without worry.

And when I made 6 figures for the first time (~ age 25), a few things happened. I felt damn good. My happiness spiked. I called my (proud) parents. I bought some overpriced shots at the NYC hot spot Marquee. And I ordered some Triple-Black Nike SB Zoom Janoski Max at double over retail price.

But within a few weeks, the high had faded. Yes, my life was much more comfortable and secure – but I definitely was not meaningfully happier than when I was earning 5 figures. And then over time I felt dull, kinda empty, and things went back to normal.

And while I’ve been super fortunate to reach many great milestones during my time on this earth — the pattern was eerily similar.

When I bought my first apartment at 28, the high lasted for a few months.

When I got promoted to Managing Director at 31 – 3 weeks.

Even when RadReads became a profitable business last year, I experienced nothing but a happiness “blip.”

Here’s how I thought reaching these milestones would impact my happiness: 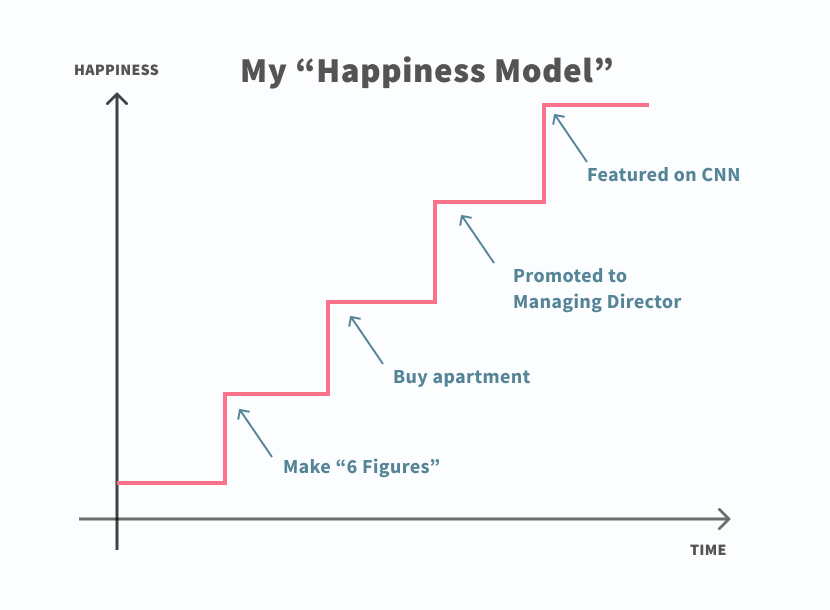 And here’s what actually happened: 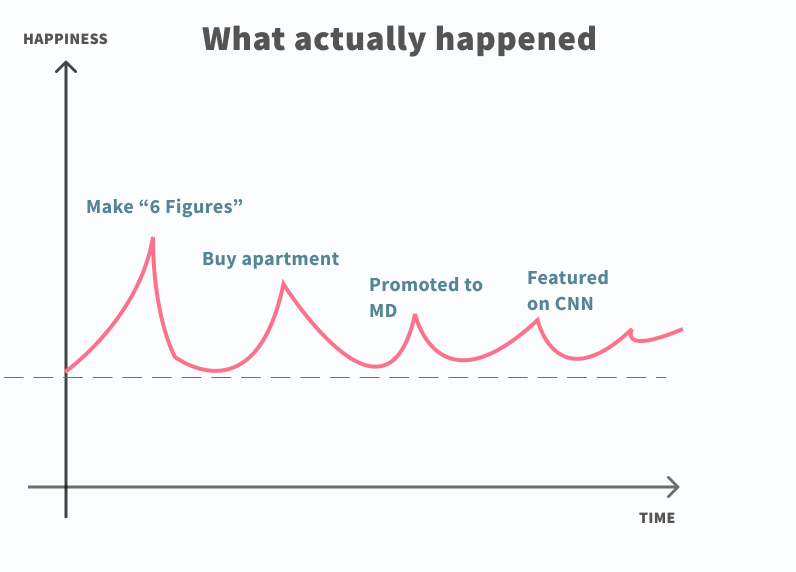 I shared this observation with a friend who drew an unlikely comparison:

“The first time you get high, you might start giggling, hallucinating, and getting the munchies after a single bong hit,” the friend continued.

“But then after decades of consumption, you might need multiple gummies to get just the slightest buzz. And you’d still crave more.”

I thought of my own experience. The highs of achievement had successively become less thrilling. Happiness – it turned out – was mean-reverting. And I was always left searching for that next hit. And then the next one.

What if I’m playing the wrong game?

After decades of seeing this cycle play out in my own life, I finally realized: what if the entire concept of the graph is wrong? What if I’m following the wrong playbook?

That’s when one of my teachers, Andrew Taggart, introduced me to the Sanskrit term neti neti, which means “not this, not this (either).” My accumulation of stuff (“not this”) and accomplishment of goals (“not this, either”) had both led me to a dead-end in my pursuit of happiness. And through this neti neti process of elimination, I was becoming really clear about what happiness was not.

Clearly, there was joy in pursuing hard challenges, building things from the ground up, collaborating with incredible humans, and (of course) surfing daily. But that didn’t tell the whole story. That wasn’t it. Something was still missing.

What was still missing?

Andrew taught me that I’d stumbled upon two “competing views” of happiness. In the West, happiness can be viewed as what’s most worth striving for and therefore most worth achieving overall.

(And in my own life, questions have continued to linger about what’s truly worth striving for – about which games are definitely worth playing.)

But what really threw me for a loop was an alternative conception of happiness. Certain Eastern traditions believe that happiness is innate within us. Right here – yet it needs to be discovered.

My interpretation: we’re all essentially happy, we just keep getting in our own way. And reflecting on my own tendencies for negative self-talk, judgment, envy, and unreasonable expectations, I could see how I might (read: did) self-sabotage my own happiness.

I grant that I’m probably not wise enough to know which approach to happiness is correct. Maybe they both have something going for them, something to say to us.

For me, these two diametrically opposed conceptions of happiness came together in my decision to expand RadReads from a solopreneur business into a true company. Yup, one with employees, benefits, policies, and all that jazz.

A daunting, yet exciting challenge.

And, this time, as I brainstormed OKRs, assessed PEOs, and crafted corporate mission statements, I felt the neti neti in my bones. I knew that my happiness graph was broken, and that the original playbook wouldn’t work this time around.

I was certain of it.

Yet I’m still pursuing achievements and want to turn RadReads into a successful and sustainable business–with one big change.

I’m doing it with eyes wide open: while it’s important, it’s not the thing that will ultimately make me happy.

That doesn’t mean I won’t do it or enjoy doing it. Because, while carrying it out, I now have a deep sense of peace that isn’t dependent on success. And I have a sense of clarity about what it can — and can’t — bring into my life. And I’m totally ok with that, with all of it.

This weekend beginning on 12/11, Andrew and I are leading a 2-day workshop to explore the foundation of happiness, get you unstuck, and put it all into practice. We hope you’ll join us.