Instagram and ice cream are two of my vices. And their utility functions are eerily similar. Nothing beats the first bite of ice cream. Actually, something does – the second. Yet the climax hits before you know it. And not before long, you’ve downed a pint of Ben and Jerrys, wishing you could rewind the clock. Here’s a graphical representation: 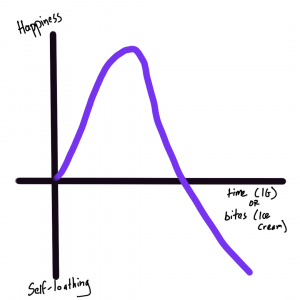 Instagram is similar. That first image when you open the app. Damn, the algo’s good. And then you say a prayer hoping that the little blue arrow in the top right corner has a number next to it. And if you’re me, forty five minutes later, you’ve perused the latest Soundcloud rap controversy, checked in on LeBron’s tattoo artist and his sneaker collection, while popping into an ex’s Instagram Story. End it always ends with the similar refrain, “These are 45 minutes of my life that I’ll never get back.”

The graph represents The Razor’s Edge. How can you satisfy the yearning without drowning in the excess. What is just enough? Just enough Instagram, that is.

I’ve tried everything to keep my pernicious iPhone tendencies at bay. Instagram is by far the most addictive so I’ve had to bring out the big guns. Deleting the app on the weekends. Using 2-factor authentication and long passwords. Grayscale. I hear from so many friends in tech, media and marketing that they “need” to use Instagram for “their work.” And I get it, I do too. And I’m thrilled to have homed in on just enough. And it’s the last five minutes of every hour.

Time Guard is a simple app for iOS that works as follows. First, you input apps (Instagram, FB, Snapchat) or websites. The default state for the apps is “blocked.” Next, you create “windows” during which you’re allowed to use the app/site.

I currently only use it for Instagram with the following schedule:

Power in the default “no”

There’s something powerful to the default state being: You can’t use the app. And you may be doing the math, saying 5 minutes an hour for 12 hours, well, that’s still an hour a day. But here’s the catch. It’s completely use-it-or-lose-it. If you miss the window, you’re SOL. If you reopen the app at 11:59, you better make that minute count. So it’s significantly less than an hour a day.

I’ve been running this experiment for 3 weeks and if you follow my IG stories (@radreadsco) you probably haven’t seen a dip in output. But here’s a confession that shows the power of these social media companies. I am now instinctively wired to know when that five minute window is approaching. If I’m in a meeting, I’ll discretely open the app under the able. In Crossfit, take a “water break.” It’s a bit sad, but I’ve long believed that you can’t “will your way” into social media self-control. So instead, let’s just keep 3 spoonfuls of ice cream in the fridge.

Note: TimeGuard blocks these sites by setting up a VPN on your phone. I’ve reached out to the creators for more clarity about how that works and if there are any security considerations.