Warren Buffet knows how much money his kids should inherit: “Enough money so that they would feel they could do anything, but not so much that they could do nothing.” That amount, $2 Bn – each!  While the number is incomprehensible, it’s great that he has a framework. Yet most entrepreneurs, lawyers, bankers and other hard-charging professionals don’t have a framework – and often avoid the question outright. And that’s a mistake – because the answer impacts how you live your life today.]

Zooming out on life’s timeline

I was talking to an entrepreneur who recently exited his company for a pretty penny. An amount, probably in the gray area between “never having to work again” and “having to work again.” He’d just hired a wealth manager and was looking at different asset allocations. They were getting into the nitty gritty, looking at trust preferred securities and Private Equity investments.

But in trying build a portfolio, they were missing the forest from the trees. I asked him how much inheritance he wanted to leave behind. And this sharp-as-a-whip entrepreneur had no idea. 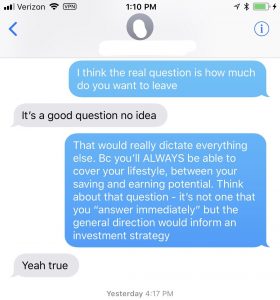 And this conversation isn’t just for the Buffets and successful entrepreneurs. Anyone who has kids (and even those who don’t) and the mix of earning power and savings should be considering this distant, yet deceptively consequential decision. And in the many conversations I’ve had with these professionals, the heartfelt intent to care for their kids gets muddled up with parental ambition. Which leads to unnecessary sacrifice along the way.

The intent behind inheritance

The day your child is born changes you forever. In the most primal sense, life’s no longer simply you and now there’s this precious being to whom you dedicate yourself to. And so parents work. Often very hard. To pay for tuition, load up 529s, medical expenses, and the hundreds of other things and experiences that bring a smile to these precisious children.

Seems perfectly reasonable. And with time, the kids will age. Expenses probably spike around college and then they’ll (hopefully) be on their path to self-sufficiency. But the conversation of inheritance, is nowhere to be found.

I suspect that there are two reasons why the conversation isn’t happening. First, it’s a memento mori – a meditation on death. It’s conversation that most ignore within their own heads, so bringing kids into the mix makes it even more terrifying. Second, it feels very far away and thus easy to punt.

So, how much to leave?

Most reasonable parents would adopt a framework similar to Buffet (but the output, unfortunately for us would be a sliver of the $2 bn.) Here’s the Oracle of Omaha:

And admittedly, there’s a lot of variability around the definition of “doing anything.” It could encapsulate everything ranging from your kids’ future jobs, where they’d live, their quality of life, home ownership and much much more. But the professionals I speak to are not concerned with leaving intergenerational wealth.

Amongst my peers, the thinking tends to be as follows:

In fact, many of my peers (like myself) grew up middle class and would love to recreate the work ethic, humility, and lack of materialism that came with this upbringing. Once you add up these line times, multiply by the number of kids, you may be surprised that it’s not an exorbitant amount of money.

I coach executives across a variety of industries. And most of them work their asses off. Traveling. Taking calls on weekends. Missing their kids’ milestones. Sacrificing their health by not exercising and not sleeping. And using booze to chill out. I’ve done (and still do) many of these things. And these executives are well-intentioned people. They don’t want multiple homes. Nor the private jet.  They genuinely want what’s best for their kids and are putting it the effort to make it happen.

But here’s the disconnect. If they actually mapped out their income trajectories relative to how much they want to leave their kids, there would be a huge discrepancy. Of course, there’s uncertainty in the income stream, but with this specific group of high performers, I’m not particularly worried that they’d ever get close to the flophouse.

Let’s break down the circularity of this thinking:

How did this reasoning get so twisted?

The anxiety of ambition

I do this type of shit all the time. I’ll be working on a blog post or a talk on the weekend. I’m totally zoned out from my family, in fact, I get annoyed when they try to talk to me. I may even snap, “I need to work. This is how I’m able to provide for us.”

But deep inside I know that this statement is stretching the truth. Yes, speaking is how I make money. But as I tweak every sentence, align every image in the deck, and rehearse it diligently – it’s obvious to me that this isn’t about our family survival. It’s about the pride I take in my work and my broader ambition. And there’s nothing wrong with that. But remember the crutch – the wedge – I had aimed at my wife. Providing for our family.

The same forces are at play with the inheritance question. In asking, then answering the question “How much do we want to leave our kids” you’ll establish a baseline. It’s probably low relative to your future earnings potential. It may even give you permission to dial back your own intensity – and spend some more quality time today with your family. Then you’ll just have to tackle the next agenda item: balancing ambition with parenthood.

I tackle these hard questions (and many more) in my coaching practice. Email khe [at] radreads [dot] co if you’d like to learn more.

Ready for a personal finance tune-up? Download our Guide to Lifestyle Creep.