I was bored the other day and played with a rap name generator. You answer a few questions and then it spits out a bunch of rap personas. Khedona, a likely tribute to the Wu Tang Clan. Urkel Urkel, as the geek chic has also found a home in hip hop. And my favorite, Big Corky, after my first pet – a guinea pig. But this was more than a silly internet distraction, I was borrowing a tactic from real hip hop stars. Long before they racked up Grammies and platinum awards, both Austin Post and Donald Glover used the same generators for their own namesakes – Childish Gambino and Post Malone. Why on earth would a musician relinquish their namesake – their entire brand and persona – to a janky algorithm on the Internet? My theory: they know how to start.

I then made up a scenario in which Donald Glover gathers a group of consultant friends to help him come up with his rap name. They might use focus groups or conduct an analysis of how rap names have evolved over history. Maybe put their findings in a pretty little deck. As this fictitious story pans out, Glover pulls out his iPhone, pushes a button, and boom: “Childish Gambino. Now let’s start making some fucking music.”

Ideas feel so crisp and doable when they’re in your head. But as the translation takes place onto paper and into action, it’s not nearly as fun. In [amazon_textlink asin=’1936891026′ text=’The War of Art’ template=’ProductLink’ store=’khemaridhhy0a-20′ marketplace=’US’ link_id=”] author Steven Pressfield calls this the Creative Resistance, “the force that will stop an individual’s creative activity through any means necessary, whether it be rationalizing, inspiring fear and anxiety, emphasizing other distractions that require attention, and raising the voice of an inner critic.”

If only I had the right tools

We avoid starting by requiring the fanciest tools. Boy, have I fallen for this one in my life. Running a marathon? Buys the most expensive shoes. Want to write more? Gets notebooks and pens shipped from Japan. Want to be more productive? Downloads five new iOS apps. The need for tools is part of the Resistance. In fact, creativity usually benefits from the constraints of having inferior tools:

[su_quote]In seventh grade I was in the band for a second playing bass guitar. I wanted to rap, but I needed beats. I couldn’t buy any so I just made my own. On Christmas when I was 13, my mom got me my first laptop. I downloaded it FruityLoops, cause I had heard about it, and started messing around. Shit just blew from there. I still use FruityLoops today.[/su_quote]

[su_quote]A lot of producers, they got to have all this crazy equipment. If your talent’s there, all you really need is some speakers and FruityLoops. Another thing, I didn’t even have Beats headphones. I was using my Apple earphones, the ones that come with the phone. Of course, now, I got some Beats. (…) As far as equipment, that’s all I have.[/su_quote]

The illusion of learning over doing

Another way to not start is to favor learning over doing. The Internet makes it so deliciously tempting to bathe in its free and abundant resources – in the form of explainers, blog posts and YouTube videos. (And when you’re done with those, throw in a few Kindle books.) But blogger Can Duruk warns:

[su_quote]It really is another form of procrastination, if not a more dangerous one in my opinion, than randomly starting to play a video game. The fact that you can fool yourself, for the most part, into thinking that you have done something really valuable with your time is really dangerous.[/su_quote]

But the biggest obstacle to starting is caring about what others think. To go Sapiens on y’all, we are wired to seek acceptance from our group – if they reject us, we’d wither away alone on the cold tundra. Yet creativity is an act of rebellion. The first (and second, and third) thing you create – will suck.

This week marked the five year anniversary of Ben Thompson’s Stratechery. Thompson’s blog and newsletter (and business model) have been a huge source of inspiration for these pages. For the unfamiliar, he’s one of the most prominent analysts covering FANG and the business of the internet. He’s the perfect example of the unbundled career and its impact on credentialing and distribution models. Thompson shared the importance of starting with this nostalgic tweet: 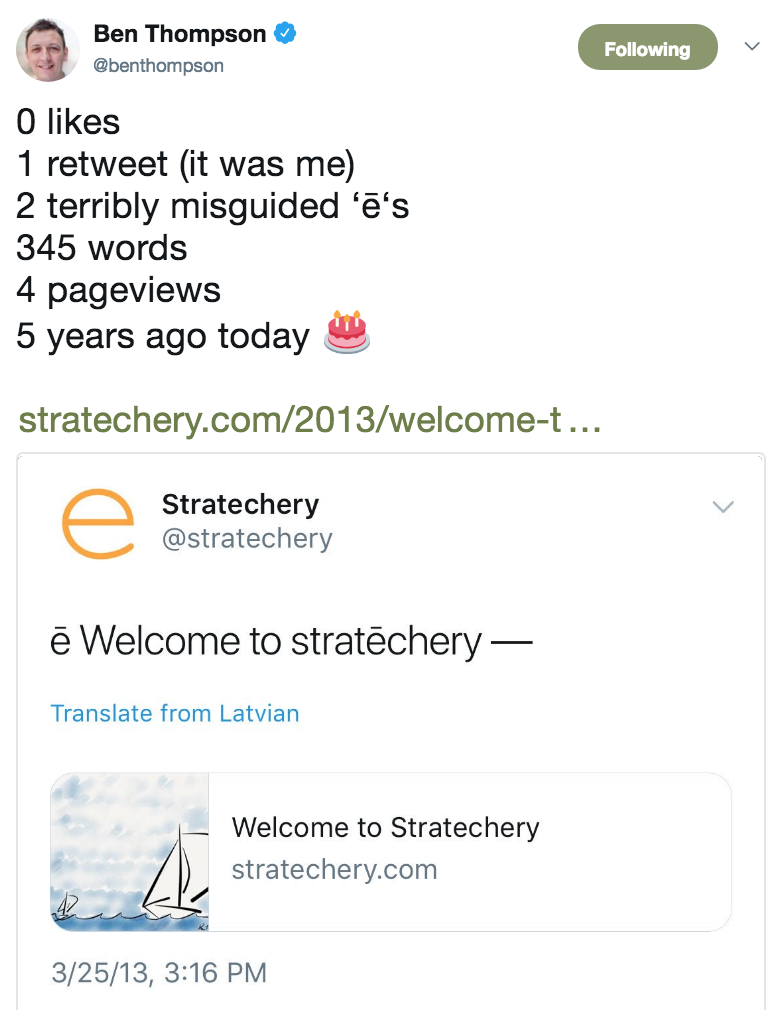 So here’s my attempt at a Childish Gambino moment. I want to make more videos – I love the challenge of visual storytelling and truly believe it to be yet another way to interact with the RadReads community. But you need tools? Nope, iPhone and iMovie. But only 12 people will watch it? That’s ok, it’s more then Ben Thompson had. But the copy and editing is so crude? Just stop talking and start. So here’s my start (an improvement from this cringeworthy 2016 video and this January magic hands video):

I showed the video to my wife and she quickly pointed out the elf with the noose around his neck (in the top right) and implored me to rerecord it. Nope, I told her I would not succumb to any Resistance. And in my Big Corky voice I said “Just trust me baby, we got this.”

You May Also enjoy